Quantizer (used with TKB) (QTKB)
The QUANTIZER (QUAN) provides a simple means to turn any control voltage into voltage steps corresponding to well tuned (equal-tempered) tones of the musical scale. It is scaled to 1 volt per octave. Thus, a zero to +5 volt envelope at the Quantizer's input produces a staircase of voltages corresponding to a chromatic scale spanning five octaves.

If patched to the 1 volt per octave input of an oscillator tuned to “E”, a gradual slope of 1 volt applied to the input of the Quantizer will produce the following steps of the musical scales:

If the 1/6 Scale Select is HIGH, then the scale produced will be:

If the 1/3 Scale select is HIGH, then the scale produced will be:

The basic Quantizer features seven or eight channels, depending on the model. Available as a “stand-alone” module, the Quantizer has seven channels and takes up two inches of panel space. Other models are available, however, with some of the channels “hard-wired” to provide quantized outputs for other Serge modules such as the various Sequencer Programmers and the Touch Keyboard... Accuracy of the Quantizer is 3 cents maximum deviation from the ideal equal-tempered semi-tone over a five octave range (i.e. just about the limits of pitch sensitivity of the human ear). Response time for all channels is about 8 milliseconds. 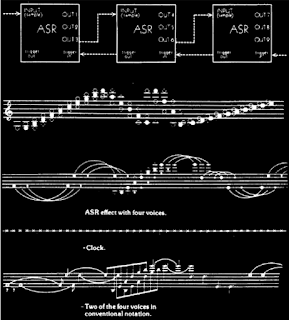 Dual Transient Generator (DTG)
The DUAL TRANSIENT GENERATOR (DTG) provides two independent outputs with voltage controllable rise and fall times. This module is identical to the Dual Universal Slope Generator except that it does not have all of the front panel features. This module is a useful, space-effective unit to be used for many of the same functions as the Dual Universal Slope Generator. Common uses of the Dual Transient Generator are for simple “AR”-type envelope generation, as a dual voltage-controlled low frequency oscillator, or as a voltage-controlled clock (especially suitable for clocking the Touch Keyboard Sequencer or any of the Sequencer Programmers). These functions can be patched with the Dual Universal Slope Generator, but since many of the features are left unused in these patches, the Dual Transient Generator provides the same function while using less front Panel space.

Random Source (RS)
[The RANDOM VOLTAGE GENERATOR (RVG) produces random voltages which vary smoothly or in a step-wise manner. Random timing pulses are also available. Rate of change of all outputs is voltage controllable over a wide range.] The RANDOM SOURCE (RS) allies a Noise source with a Random Voltage Generator in one single module.

Control Voltage Processor (PRO)
Control modules are essential and they can be categorized as two types:
The automatic controls can be as simple as a low frequency oscillator to produce vibrato or slowly moving cyclic changes, or can be very complex. The Touch Activated Keyboard Sequencer, all of the Sequencing Programmers, and the Pitch and Envelope Follower provide powerful performance interfaces between the performer and the instrument(s), and many others can be used. Pressure controllers, joysticks, foot-pedals, electronic keyboards, and other sophisticated controllers such as light sensors computers and microprocessors are easily connected to the Serge system.

Control voltage processors add another dimension to patches in the analog synthesizer. The Smooth and Stepped Function Generator, the Dual Universal Slope Generator, the Dual Comparator, the Analog Shift Register, the Active Processor, and the Quantizer further extend the hierarchy of sound synthesis and control, and along with some of our specialized audio processors, these sophisticated modules enable synthesis of the highest order.

Dual Universal Slope Generator (DSG)
The DUAL UNIVERSAL SLOPE Generator (DSG) is the ultimate patch-programmable control voltage generator in the Serge system. At least one (DSG) is recommended for almost every Serge system. and in most cases, a number of these are desirable. People familiar with our previous series of “slewing” modules know about the importance of this kind of function in a large patchable synthesizer system. For those unfamiliar, it is advised that the various applications as outlined here and in the Serge Owner's Manual are studied. The uses of this module are numerous, some duplicating functions found on other synthesizers, some totally unique to the Serge system. Most systems require a number of control voltage generators to control the various signal processors and modifiers. Sources of trigger, pulses (clocks), control voltage processors (portamento's), regular repeating voltages (LFO's) are standard synthesizer requirements. The Dual Slope Generator is the main module providing these functions in the Serge system.

The Universal Slope Generators are unity gain voltage followers with voltage controllable slopes. The range of control is exponential, extremely wide, and the Rise and Fall times can be controlled independently. The range of the Slope Generator is from sub-sonic to high audio frequency. Trigger inputs and trigger outputs allows each section of this dual module to function as a transient (envelope) generator, pulse delay, or in a “cycling mode” (to produce an LFO or clock). Since the Rise and Fall times are voltage controllable, this adds another dimension to the above functions. Two VC inputs are available, one is calibrated at 1 volt per octave (within about 3%), and the other is fully adjustable in the negative and positive direction. This VC input can control either the positive slope (rise), negative slope (fall), or both. The linearity and accuracy of the slewing amplifiers allows them to be used in the most exacting applications, such as processing the output of a keyboard or sequencer to produce portamento functions. Note that this portamento function has a separate rate control for rising notes and falling notes... An interesting portamento effect. Among the functions which one Slope Generator can be patch-programmed to perform are the following:

Extended ADSR (ADSR)
The EXTENDED ADSR (ADSR) is a complex envelope generator using the four segment envelope normally encountered in keyboard synthesizers. This ADSR, however, is designed with extra features such as voltage control of each section, an initial voltage controllable delay time, switchable slopes, and a master voltage control. Each segment may be manually set and voltage controlled, so the module may be used with or without keyboards as a versatile, programmable control voltage generator. In addition to the normal Attack, Decay, Sustain, and Release segments, an Initial Delay time is included. This allows multiple envelopes to be initiated from a single trigger or gate, delayed with respect to one another. Ramps for the Attack and Release segments can be switched to either linear or exponential slopes with the three-position switch. In the left [i.e. top] position, the Attack will have an exponential slope. In the middle position, both the Attack and Release will have an exponential slope, and in the right [i.e. bottom] position, all will have linear slopes. A master 1V/OCT control will control all slope times to allow such effects as decreasing the entire envelope time as the pitch of an associated oscillator increases. This phenomenon is typical of many acoustic instrument envelopes.
Email ThisBlogThis!Share to TwitterShare to FacebookShare to Pinterest