The DUAL CHANNEL STEREO MIXER (DCSM) is an alternative output VCA/MIXER/PANNER for two and three-panel systems. The other choice for small systems is the UNIVERSAL AUDIO PROCESSOR (UAP). The UAP can be used for a number of voltage controlled mixing functions, but the DUAL CHANNEL STEREO MIXER is used for the standard output level control (or enveloping) and for voltage controlled panning. The DCSM has two independent channels for stereo panning, whereas the UAP can pan only a single channel when used as a stereo panner. Each channel in the DCSM has two VC inputs, one for amplitude control and one for panning. The panning controls are opposite for the two channels, so that if a single control voltage is used, the output signals will pan in opposite directions. Auxiliary inputs are used to mix other signals into the outputs of the module. Signals applied here will not be affected by knobs or control voltages applied to the module. These are mainly useful for linking other mixers (either manual or voltage controlled) to the output bus. The output is available at a pair of banana Jacks (for routing the signals to other modules within the synthesizer), and at mini-Jacks (for connecting to external amplifiers, tape decks, and other equipment). 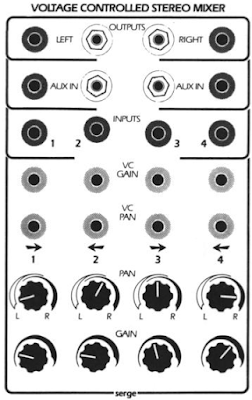 The QUAD INPUT VOLTAGE CONTROLLED STEREO MIXER (QVM) is an excellent low noise mixer for small to medium size Serge systems, since it incorporates an equal power stereo panner as well as a voltage controlled amplifier for each of four inputs. Both signal level and spatial location can be controlled manually or by voltage control. The Mixer is also well suited for external computer control and for automated mix-downs with voltage programmable spatial positioning. Two or more Quad Input Stereo Mixers can be connected together conveniently to form mixers of eight, twelve, or more inputs by connecting the outputs of one to the auxiliary inputs of another. Outputs and Auxiliary inputs are provided with mini-jacks in addition to banana jacks to facilitate hook-up to external audio equipment. 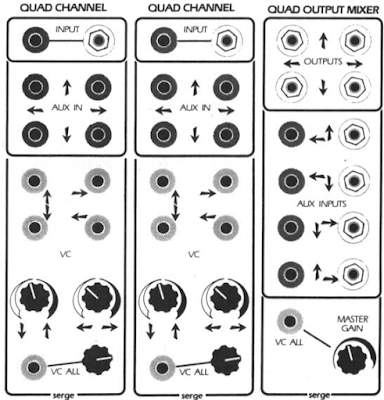 
The MULTI-CHANNEL QUADRAPHONIC MIXER (QMX) is the top of the line studio quality output mixer for four channel applications. From a minimum of two inputs, it is expandable up to seven independent inputs. Like the other Serge output mixers, this module is an especially important module for live performance, for computer control of amplitude and location, and for automated mixes in the studio.

The Quad Mixer consists of two or more input sections with a single Quad Output Mixer. An equal-power QUAD PANNER CHANNEL (QPC) is used to position the sound image in quadraphonic space. The amplitude of each channel is controlled by a VCA, so that both gain control and spatial location can be realized simultaneously in each Quad Channel. An input is available for mini-phone plug hook up to external audio sources. Due to fast response, low distortion, and excellent control voltage rejection, location modulation can be effected up to supersonic frequencies in quad space with virtually no noise.

The Quad Output Mixer sums the quad signals from each Quad Panner Channel. An important feature of this output section is the master gain VCA, which controls the overall level of the quadraphonic outputs. Thus, the entire output level can be conveniently faded in, faded out, or adjusted with a single knob or control voltage. There are four Auxiliary inputs, one to each outputs channel for mixing other signals into the output mixer. There are also Auxiliary inputs on the Quad Panner Channels which are voltage controlled in such a way that spatial cross-fading can be achieved. The sound from one speaker can be faded out, while a different sound at another speaker is faded in. 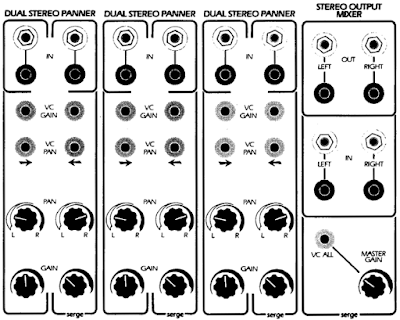 The MULTI-CHANNEL STEREO MIXER (SMX) Is an expandable studio quality output mixer for medium to large Serge systems. From a minimum of six input channels, it is expandable up to 14 channels on one panel. This Stereo Mixer is an indispensable aid for live music performance or can be used with appropriate computer control for automated stereo mix-downs in the studio. The standard unit consists of three DUAL STEREO PANNERS (PAN) wired to a single Stereo Output Mixer. Each Dual Stereo Channel contains two equal power voltage controlled stereo panners. Each panner is used to position the input signal to a Stereophonic sound field with manual or voltage control. A VCA allows the overall amplitude of the channel to be voltage controlled. Each panner has an input fitted with both a banana jack and a mini-jack for use with signals from within the system and for hook-up to external sources such as tape recorders. Due to the fast response, low noise, and excellent control voltage rejection, location modulation can be achieved up to supersonic frequencies with virtually no noise. The Stereo Output Mixer sums the stereo signal from each Panner section. An important feature of this output section is a master gain VCA which controls the overall sound level of the two stereo output signals. Thus, the entire output mix can be faded in, faded out, or adjusted with a single knob or control voltage. Auxiliary inputs allow non gain controlled inputs to be added directly to the final mix. Mini-phone jacks are included on the outputs to connect directly to other equipment.
Email ThisBlogThis!Share to TwitterShare to FacebookShare to Pinterest