The VARIABLE Q VCF (VCFQ) is an excellent general-purpose VCF offering simultaneous low-pass, high-pass, band-pass and notch (band-reject) outputs. The resonance (Q) of this filter is dynamically variable by manual or voltage control. The VCFQ has two signal inputs. One incorporates an automatic gain control to prevent the filter from overloading at high Q settings. The second input has a level control so that the percussive effects of overloading the filter can be exploited. When a pulse is applied to the Trigger input, the filter will ring, producing a damped waveform similar to that produced by striking a resonant object. The nature of this ringing is controlled by the Q and the filter frequency. Percussive effects ranging from clicks to the sound of wood blocks and bell tones can be produced and controlled. This ringing effect can be used in conjunction with signals applied to either of the audio inputs to achieve highly controlled complex tonal qualities.

[Pictured at left is the later generation VCFX (described further below). The original VCFQ did not include the HI/LO switch, and the outputs at the top were arranged differently, with LO and BAND swapped.] 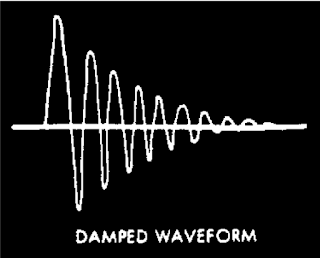 The VARIABLE BANDWIDTH FILTER (VCF2) has a band-pass output which can be varied manually or with voltage control. This is a standard response synthesizer VCF, typical to filters used in many studio systems. In the VCF2, two state-variable VCF's are connected in series to produce a total of five outputs. High pass, low pass, two fixed bandwidth outputs, and one variable bandwidth output are available. The outputs are all flat-response (no resonance) so the VCF2 is suitable for processing concrete sounds without introducing resonant coloration to the timbres. Under voltage or manual control, cut-off frequency of the high and low-pass outputs are affected, as well as the center frequency of the two band-pass outputs. Both center frequency and bandwidth are independently controllable on the variable bandwidth output. 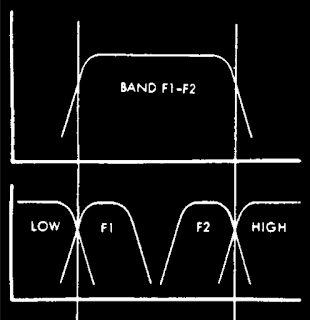 The VARIABLE SLOPE VCF (VCFS) offers unique control of sound quality offered by no other synthesizer manufacturer. All VCFs offer voltage control of the cut-off frequency (i.e. control of which frequencies the filter lets pass). The VCFS allows the amount of filtering to be dynamically controlled as well, from barely perceptible filtering to highly resonant, sharp cut-offs. With the variable slope control in the center position, the VCFS acts as a typical flat-response VCF, with high-, low- and band-pass outputs available simultaneously. The slope of the cut-off is 12 db/octave. As the control is moved toward the maximum position, the resonance of the filter increases, so that the cut-off becomes sharper. Although the VCFS will not ring like the VCFQ, it will resonate enough at the maximum setting to pick out harmonics from a complex signal input. As the control is moved to the minimum position, the cut-off slope will decrease to 6 db/octave. This type of change of filter slope has been found to be an effective synthesis technique corresponding well with some of the transformations in acoustic instrument sounds. There are two signal inputs to the VCFS which can be mixed and manually cross-faded from the associated knob. 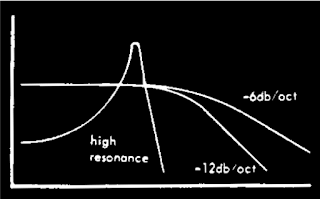 In addition to the three VCF's, Serge Modular offers an EXTENDED RANGE VCF (VCFX) which is identical to the VCFQ except it features a second sub-audio range. This low-frequency range allows use as a control voltage processor. A fast envelope or trigger applied to the filter in the low range at high Q settings will cause low-frequency ringing, generating complex envelopes and damped vibrato effects. The VCFX can be patch programmed to oscillate by patching the band-pass output to the manuaal input. The outputs will be in quadrature relationships (90 degrees out of phase).
Email ThisBlogThis!Share to TwitterShare to FacebookShare to Pinterest