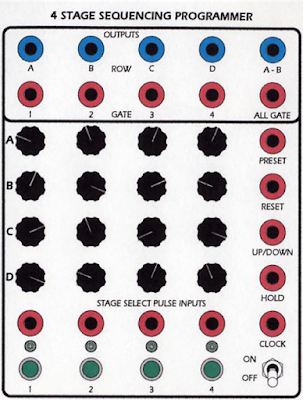 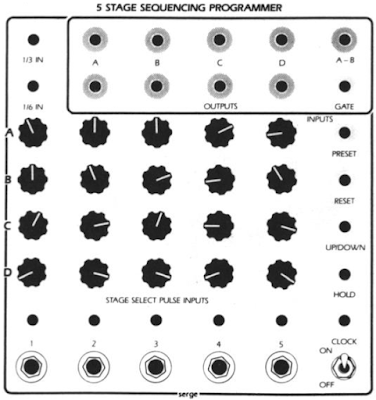 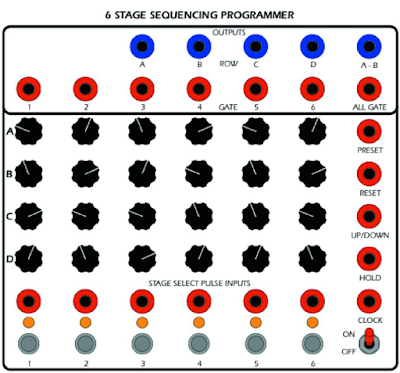 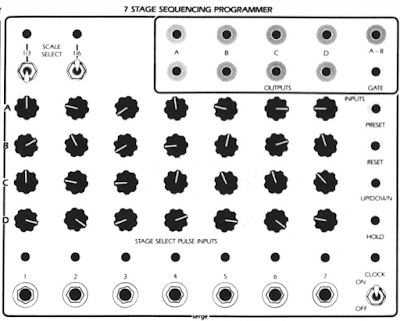 Years ago Serge Modular manufactured a four-stage Sequencer Programmer which was discontinued when the sixteen stage Touch Keyboard Sequencer came into production. Musicians have often wondered what happened to it, since they liked its economy, and the fact that its modest dimensions did not tie up an entire Panel for a couple of preset voltages. Our new line of Sequencer Programmers was designed to fill this need. These new controllers are far more powerful than our early model, however, since we have incorporated most of the functions which have proven so successful in the Touch-Keyboard.

Features common to all the SEQUENCER PROGRAMMERS (SQP4-8) include the ability to be used as push-button, manual programmers and/or as multi-versatile sequencers. As in the Touch Keyboard, the length of sequences can be programmed interactively via the pushbuttons: thus sequence lengths can be changed in performance while a sequence is running. Other sequencing capabilities include PRESET, RESET, UP/DOWN, HOLD pulse inputs, and a switch to START or STOP the sequencer. PULSE STAGE SELECT inputs allow triggers from other modules to turn specific stages on... A unique feature is the A-B output (read A minus B). This outputs the difference between the voltages available separately at A and B, a feature resulting in interesting harmonic effects when the three outputs are controlling VCOs.

The real power of the new shorter length Sequencer Programmers, however, is their use in tandem with one another. Two sequencers are more interesting than one. They can be phased one against the other with the same or separate clocks. They can be patched to interact with each other, providing an incredibly varied palette of rhythmic patterns. A master unit can control one or more slave sequencers, resulting in highly controllable flurries of tonal sequences being modulated both harmonically and rhythmically.
[Ty: More can be said about how the following inputs work while under clock control:
Further notes about the UP/DOWN input: If the programmed first stage is 1, the sequence will stop at stage 1 when the direction is reversed. It will require pressing another STAGE SELECT button (e.g. the button at the other end) to resume movement. Likewise, when the direction is changed again, the sequence will stop at the final stage corresponding to the previous button pressed. It will require pressing another STAGE SELECT button or triggering its input (e.g. at the other end) to resume movement.
To use the UP/DOWN input without the sequence stopping, set the starting stage to anything besides the first or last available stage.
All input jacks respond to gates or triggers, but based on the behaviors described above, STAGE SELECT, RESET and PRESET are more oriented to triggers, and UP/DOWN and HOLD are more oriented to gates.] 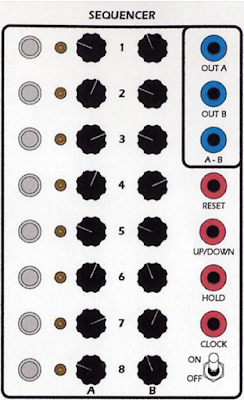 ...[The] SEQUENCER (SEQ8) [is] a module with only two rows of output presets, but with 8 stages of sequencing in only four inches... As in the Touch Keyboard, the length of sequences can be programmed interactively via the pushbuttons: thus sequence lengths can be changed in performance while a sequence is running. Other sequencing capabilities include RESET [Ty: or PRESET], UP/DOWN, HOLD pulse inputs, and a switch to START or STOP the sequencer. A unique feature is the A-B output (read A minus B). This outputs the difference between the voltages available separately at A and B, a feature resulting in interesting harmonic effects when the three outputs are controlling VCOs.

Touch Activated Keyboard Sequencer (TKB)
The TOUCH ACTIVATED KEYBOARD SEQUENCER (TKB) is an extremely versatile manual and automatic controller, combining the functions of a touch-sensitive keyboard, a voltage programmer (pre-set selector), and a sequencer. As a keyboard-programmer it permits the performer to access up to 16 separate stages of 4 voltage presets and trigger pulses. The touch programmer can be used to change the settings of other modules through voltage control, altering the characteristics of a sound patch and routing/switching events in live performance or in the studios. Additionally the keyboard produces a scale of equal interval voltage “notes” [KV output] and generates a common trigger pulse [KP output] which duplicates the function of a traditional synthesizer keyboard. This equal-interval voltage can be set to produce the chromatic scale, or any equal division of the musical scale (6 notes per octave, 3 notes per octave, 24 notes per octave, etc). A PRESSURE output senses the amount of area touched on the touch pads and produces a corresponding control voltage. This feature allows an additional expressive parameter to be controlled while playing the touch pads.

As a sequencer this module permits a wide variety of sequencer effects, since the 16 stages can be programmed to go forward and reverse, can be set to run through any desired number of stages (from 1 to 16), and can be triggered to skip among stages in a semi-random pattern. These sequencer functions can be further enhanced using the touch keyboard to interact with the sequencer so that the sequence length and stage access can be programmed at a touch in actual performance. In addition, a second four-stage sequencer is built in to sequence vertically through the four rows (A, B, C, D), making it possible to switch from one sequence row to another and to produce sequences up to 64 stages in length. [Ty: The voltage at the ABCD output corresponds to the knob at the intersection of the active row and active column. For example, consider a 64-step sequence: At the 63rd step of the sequence (which corresponds to row D, stage 15) the voltage defined for D15 appears at ABCD, while simultaneously the voltages for A15, B15, C15, and D15 appear at their respective A, B, C, or D outputs. On the final step of the sequence, D16 appears at ABCD, and A16, B16, C16, and D16 appear at their outputs].

Specific features include light-emitting diodes on each stage for immediate visual indication of sequences/programmer activity, dual RESET inputs for a variety of rhythmic effects [Ty: or, more likely, one RESET input and a forward/reverse switch], and a HOLD function to disable sequencing. The KEYS [or KEYBOARD] switch is included to partially disconnect the keyboard function from the sequencer. This allows the user to use the KV (Key[board] Voltage), KP (Key[board] Pulse), and PRESSURE outputs from the keypads as a strictly manual controller, independently of the 16 stage sequencing action.
Email ThisBlogThis!Share to TwitterShare to FacebookShare to Pinterest