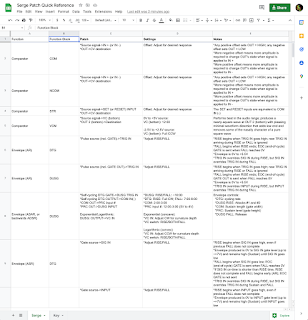 [Post updated Nov 2022] I've assembled a rather large work-in-progress Serge Patch Quick Reference, and I'm pleased to share it here (permanently linked off to the right under Patching Tips).

I mined the notes and patch suggestions from various sources, including the old Yahoo! Serge group and the Quad Slope forum (many thanks to cebec for capturing them before they disappeared). Other sources include the original Egres site (no longer updated but archived here at Rex's suggestion), Ken Stone's Serge site (RIP?), the current Serge Discord server (requires invite), as well as my own research and patch spelunking. And of course the venerable Serge manuals from the 1970s and 1980s.

The behaviors described in these patches are from my own direct observations using eyes, ears and oscilloscope. There are a couple exceptions. My Serge is currently comprised of STS (Hartland) M-boats and a pair of THC 'Homebuilt' panels, so if you have a Serge from the 1970s or 1980s, or a modern DIY or non-STS system, you might get different results. Hopefully the information here will at least point you in the right direction.